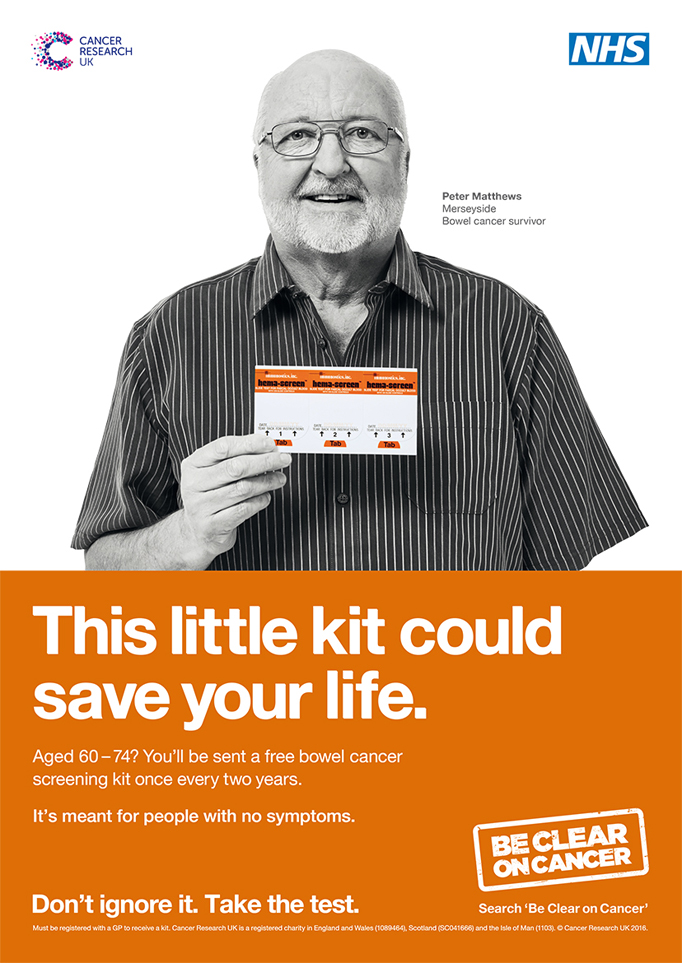 All men and women aged 60 to 74 are invited to carry out a faecal occult blood (FOB) test. Every two years, they're sent a home test kit, which is used to collect a stool sample. If you're 75 or over, you can ask for this test by calling the freephone helpline on 0800 707 60 60.

An additional one-off test called bowel scope screening is gradually being introduced in England. This is offered to men and women at the age of 55. It involves a doctor or nurse using a thin, flexible instrument to look inside the lower part of the bowel.

However, all screening involves a balance of potential harms, as well as benefits. It's up to you to decide if you want to have it.

To help you decide, read the pages at NHS.uk website on bowel cancer screening, which explain what the two tests involve, what the different possible results mean, and the potential risks for you to weigh up. Read more about screening for bowel cancer.

CONTACT
18 Allport Lane
Bromborough
Wirral
Merseyside
CH62 7HP
Contact Head Office
INFORMATION
Premises GPhC Number:
See branch list
Superintendent
Dawn Swettenham
OPENING HOURS
BRANCHES
Swettenham Chemists, Blacon
Swettenham Chemists, Kingsway
Swettenham Chemists, Bromborough
Swettenham Chemists, Rock Ferry
See All Branches
Cookie Policy
Privacy Policy
Terms And Conditions
Local Shopping Policy
Copyright 2021
Powered by www.thepharmacycentre.com
and www.medicinechest.co.uk
We were unable to connect you to our system.
Please click to try again.
If this problem persists contact info@thepharmacycentre.com
This website is no longer available, If you are the pharmacy owner, please contact The Pharmacy Centre to re-activate.
Don't show this again
Don't show this again
MENU
Main Menu
No Results
Shopping Categories
More Categories
In Store Shopping
More Products
Online Shopping
More Online Products
Health
Search Health Articles...
Search Medicines...
Coronavirus Advice
Admin Tools
Settings
Volume
Text
Device
Your Basket
In Store
Total
Checkout
Online
Total Excl VAT
VAT
Total
Checkout
Live Chat
Live chat is currently disabled. Toggle the switch to make yourself available for live chat.
Active
Pending
Type your message and press enter to send, An administrator will reply to you shortly
Chat...
Send
End Conversation
Back to Chats
Please select a branch to view orders, patients and history...
Website
Select Branch
Order In
Patient Orders
Pending Orders
Complete Orders
Order History
Patients
Register Reminders
Statistics
Configure
Log Out
Speciify which content you wish to enable on your site
Flu Pages & Content
Medic Spot Covid Test Pages & Content
Medic Spot Travel Planner
Online Doctor Pages & Content
Testimonials Pages & Content
Travel Clinic Pages & Content
Back
Next
What do you want to do?
Visit the website home page
Visit the website page for my pharmacy
Change my pharmacy
Back
Next
1
2
3
4
5
6
7
8
9
10
11
12
13
14
15
16
17
18
19
20
21
22
23
24
25
26
27
28
29
30
31
Back
Next
Please provide your email address you use to login to your account, we will then send you a password reset code.
Email
Back
Next
Back
Next
The following list shows all the items you have placed orders for, click on an item to see all the dates you have placed an order for the item.
Back
Next
Please provide a little more information to finish setting up your account...
Which of our stores you use
Are you registered for GP online services?
The surgery you are registered with
Are you exempt from prescription charges?
A contact telephone number
Your home address
Messages
No new messages
Your surgery does not currently allow you to place orders via GP online services. Please contact your surgery to resolve this or click here to unlink.
Online prescription ordering is not currently enabled for your branch. You can still store your items and set reminders to re-order.
You haven't set up any reminders to reorder your prescription items. Click here to setup reminders now
Your recent prescription orders
What do you want to do?
Change User
Order
Manage
Pharmacy
History
Purchases
Log Out
Please enter your login details to access your account...
Email
Password
Keep me logged in
Help! I have forgotten my password
Back
Next
To keep your password secure you will periodically need to change it. Please provide a new password to login to your account.
Email
New Password
Back
Next
If you have an NHS account you can use it to login to your account. By doing so we can automatically collect information required to connect to your GP online.